How to store Microfilm

Microfilm was almost the internet of its day, allowing access or capture of large amounts of information stored in a compact format. In fact, it is still a current format although much less prevalent. Whilst digitisation has replaced microfilm in most cases there are still large archives and collections of microfilm containing data that is not available elsewhere. It means that it's important remaining microfilm reels are stored correctly to ensure they are available and preserved for many years and decades to come. So how do you store microfilm? 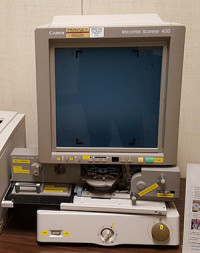 Microfilm exists in more than one format and with different materials as the film base and image layer. Usually found on 16mm or 35mm reels or microfiche cards.

Nitrate - Older microfilms are likely to have been made from cellulose nitrate with a silver gelatin image process. This process was commonly used from c1935 up until the 1950s. They are incredibly flammable and emit harmful gases as they age and degrade. Degrading films could be dangerous and not suitable for storage.

Acetate - Because of the safety issues with cellulose nitrate bases, cellulose acetate was introduced as a safer media, it's also known as 'Safety Film'. Available as early as c1925 it's still used today. This type of film degrades and produces a distinctive acidic smell that is known as 'Vinegar syndrome'. There are products available to monitor for the early signs of degradation called A-D strips. Acetate film can be stored but must be protected and any film that has begun to break down must be removed from the collection. Vented or card boxes allow gases to escape that could otherwise build up and speed up deterioration caused by vinegar syndrome.

Polyester - More recent microfilm dated c1960 onwards on a polyester base is much more stable and if preserved correctly could last 100s of years. Polyester is used as an enclosure material in conservation too, it's a tested and trusted material that can last hundreds of years in the correct conditions.

What else causes damage to Microfilm?

Aside from the issues around the film base material, the image layer is also prone to damage. As the image is reduced to a fraction of the size of the original, any imperfections are exacerbated when blown up. Damage to the image layer can be called micro-blemishes or 'measles'. So what are the risks to the image layer? 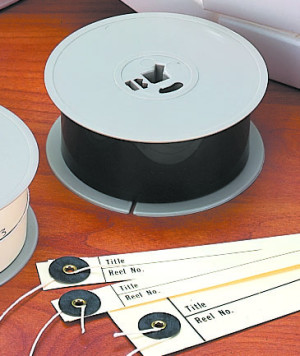 So what can you do to protect your microfilm?

A full enclosure like a box is therefore important and there is more than one benefit:

How to make a storage box for microfilm 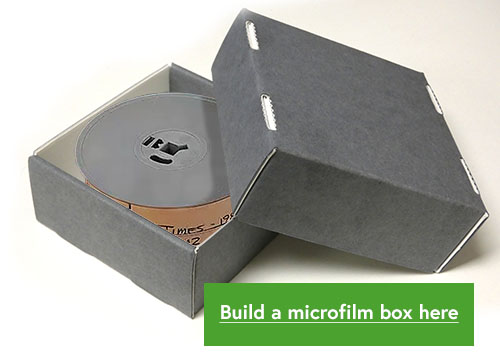 We've made it really easy to make microfilm storage boxes.

We've matched the outer box sizes up for collections where a variety of 16mm and 35mm are present so they stack nicely. You can adjust the dimensions if you'd like to make a smaller box.

What is an archival box?

What does buffered mean for my box?

What does 'PAT passed' mean?

How strong are our boxes?